How I Became a Successful Baking Influencer with Boston McGahie

From getting his first job as a dishwasher at a small bakery in Austin(Keller), Texas to having over 100k followers on Instagram, PME spoke to @bostonbakes21 about his predictions for future baking trends, his cake decorating skills and how he grew his online following in such a short amount of time.

Boston, 21 who is currently a University student majoring in Biology, started his baking career 4 years ago at The Sweet Spot bakery in Keller, Texas where he progressed from washing dishes, to decorating cupcakes to eventually becoming a cake decorator. Although he is mostly self-taught Boston has worked in 3 different bakeries, each allowing him to learn and gain confidence as a baker. He recently landed his current role at the Insta famous Hayley’s Cakes and Cookies Bakery (@thehayleycakes) in Austin, Texas. 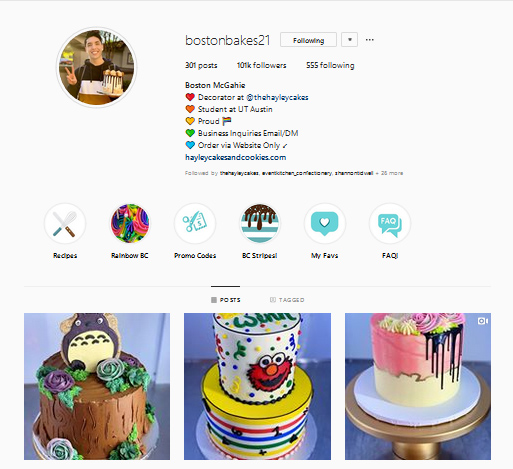 Our first question for Boston was what is the biggest baking trend of 2019?

Without hesitation he answered the Fault Line cake, a trend that creates a gap effect using buttercream, the Fault Line has been taking Instagram by storm since the beginning of the year.

Boston went on to tell us that he and another baking influencer Sheri Wilson (known on Instagram as @sheri_wilson_) were one of the first to pioneer this trend back in April, when they collaborated on an elegant white and gold sprinkle cake which was liked and shared all over the world. The new ‘gapped technique’ design served as inspiration for cake decorators everywhere – now known as a Fault Line Cake.

Since then we’ve seen the Fault Line design recreated in loads of different ways, Boston recreated it more recently by using a cookie dough effect – we love this look! 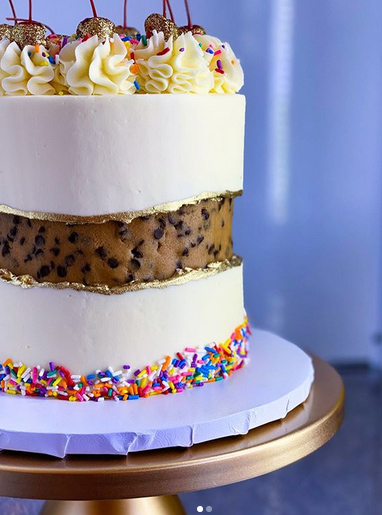 While we were on the topic of trends, we took this opportunity to ask Boston what he thought was going to be the next big animal trend, as we’ve seen how popular the unicorn and flamingo design have been.

Boston’s prediction for the next animal trend is the Llama! 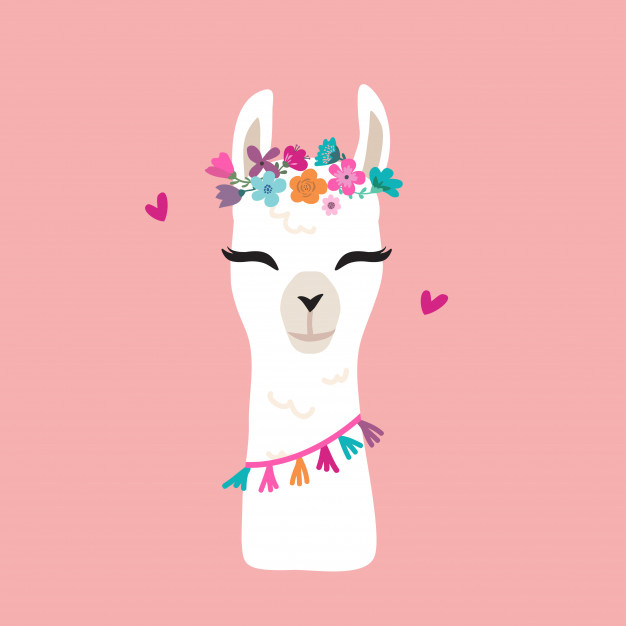 The Llama trend is one that has been seen in cushion and homeware trends for some time, similarly to the unicorn, the trend has now made its way to the baking world. More specifically, Boston mentioned the above style of the Llama face with tea lights as a necklace has been a popular design for biscuits and he predicts that this will be the next big trend!

Just by viewing the first few posts on @bostonbakes21 it’s evident that Boston loves experimenting with buttercream, he uses a variety of both traditional and contemporary skills on his cakes. Boston goes on to tell us that learning to decorate freehand is a skill he’s picked up recently as most of the cakes he decorates require detailed piping detail. 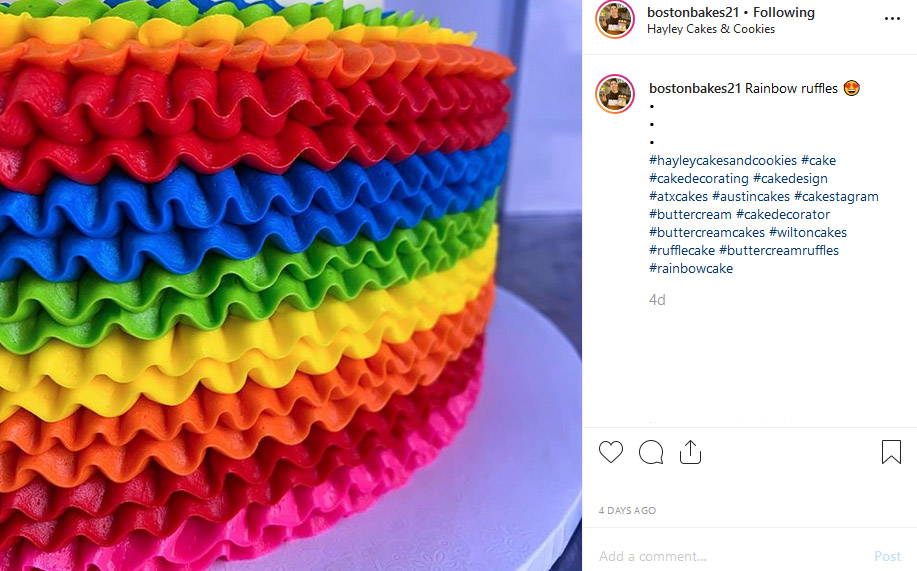 We all know that every great baker needs a great set of tools! So our next question for Boston was what his favourite piece of decorating equipment is - and just by looking through his creations it’s obvious he’s a fan of the stripey side scrapers (see his Instagram picture below) so this is the answer we were expecting – he caught us off guard when he told us he loves traditional piping designs, “perhaps it’s because I’ve been trained in bakeries that mostly decorate with piping but I also enjoy the freedom of free handing”. 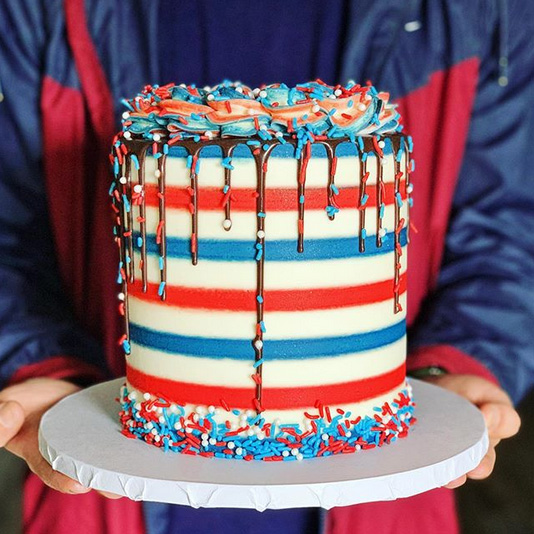 By this point in the interview we had a good understanding of Boston’s passion for baking and his experiences within baking, so our next question was how he has built his social media following to over 100k.

Boston explained that when he started working at HayleyCakes he had just 700 followers and within 6 months - January 2019 - he had reached a follower count of 10,000! Furthermore his account has now grown over 100k followers only 6 months later. Boston puts this growth down to being in tune with the trends and the community, posting lots of captivating videos and having the exposure from working with such a talented bakery.

Before we ended our interview with Boston, we had one final question, one which is dreaded by most millennials...

How much time do you spend on social media?

Boston chuckled before admitting it was probably about 3-4 hours per day, he spends that time making posts, responding to comments and checking in on the latest trends. He went on to say that working for a bakery that allows him to document his creations has saved him time and money when creating content for his Instagram account and that all of the photography and videography has been filmed by him on his IPhone. 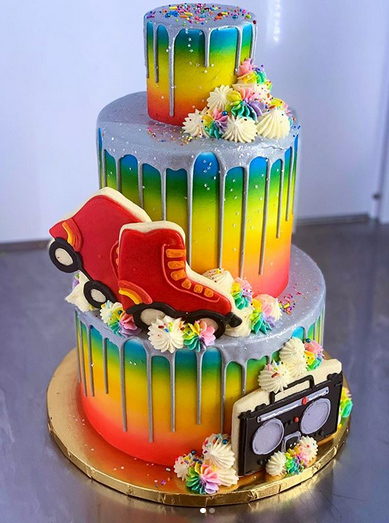 Further help on writing your own privacy notice can be found here:

Retail is part of Retail Group PLC which includes Retail International and Retail Direct. This privacy policy explains how we use any personal information we collect about you when you use this website.

What information do we collect about you?

We collect information about you to process your order, manage your account and, if you agree, to email you about other products and services we think may be of interest to you.

We use your information collected from the website to personalise your repeat visits to our website. If you agree, we shall pass on your personal information.

Retail will not share your information for marketing purposes with companies outside the Retail Group PLC.

In processing your order, we may send your details to, and also use information from credit reference agencies and fraud prevention agencies.

How will we use the information about you?

We collect information about you to process your order, manage your account and, if you agree, to email you about other products and services we think may be of interest to you.

If you agree, we shall pass on your personal information to our group of companies so that they may offer you their products and services.

Retail PLC will not share your information for marketing purposes with companies outside the Retail Group.

In processing your order, we may send your details to, and also use information from credit reference agencies and fraud prevention agencies.

We would like to send you information about products and services of ours and other companies in our group which may be of interest to you. If you have consented to receive marketing, you may opt out at a later date.

You have a right at any time to stop us from contacting you for marketing purposes or giving your information to other members of the Retail Group.

If you no longer wish to be contacted for marketing purposes, please click here, or if you wish to have your details removed click here to contact us.

You have the right to request a copy of the information that we hold about you. If you would like a copy of some or all of your personal information, click here to contact us. We may make a small charge for this service.

We want to make sure that your personal information is accurate and up to date. You may ask us to correct or remove information you think is inaccurate.

This information is used to track visitor use of the website and to compile statistical reports on website activity.

We also use cookies to improve your user experience, by remembering your basket items when you return to the site.

For further information visit www.aboutcookies.org or www.allaboutcookies.org. You can set your browser not to accept cookies and the above websites tell you how to remove cookies from your browser. However in a few cases some of our website features may not function as a result.

We keep our privacy policy under regular review and we will place any updates on this web page.

CloseX
Join Our Newsletter
Be the first to know about our latest product developmentsNEWS, OFFERS AND MOREeverything straight to your inbox!

Do you want to use our American site?

No thanks Yes please